Monday I’ve learned what I suspected for a while. YouTube is going forward and enforcing its Cosmic Panda update. I found a note/link on my logged in YouTube page saying “All channels will be updated to the new design on March 7th 2012.” Clicking on it I got to the page describing the new YouTube channel options. From a developer/designer’s perspective the options are much more limited than previously. I can still upload a background image, but none of the major sections of the regular YouTube channel page can be set transparent. Furthermore in the old version of YouTube there were 8 modules that I could turn on and off and position on the page ( Ask Your Audience, Comments, Event Dates, Moderator, Other Channels, Recent Activity, Subscribers, Subscriptions) . These modulels are gone in the version and instead we can select 1 of four preset options/combination (Creator, Blogger, Network, Everything) and enable or not a “Featured” tab. The combined effect of these changes is that most YouTube channel will look very similar to each others. 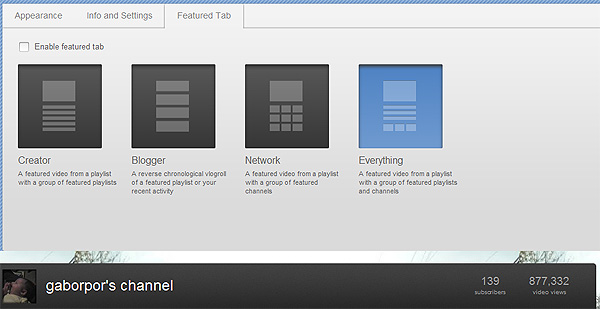 On the same day I read some rumors about upcoming Twitter changes which points to the other directions, with the introduction of “enhanced” pages. Econsultancy wrote: “the enhanced pages will allow brands to add additional interactivity to their Twitter accounts. The enhanced pages may even include iFrame support, which would allow users to play games or shop on a brand’s site without actually leaving the Twitter environment.” They link to The Wall, which in turn linked to AdAge:

According to an email from a Twitter account executive obtained by Ad Age, the roll-out of enhanced brand pages will only be available to those firms committing to spend in excess of $25,000 a year in advertising.

The initial group of 21 brands which got the original versions of brand pages in December were all higher-spending media partners and were said to be spending around $2m a piece.

This means that while YouTube is homogenizing the user experience, Twitter is allowing (at least for big spenders) making Twitter pages be very different from each other. We’ll see who wins on the long term. I bet on both. They are both learning from MySpace’s example which originally went too far in allowing users to modify their pages/profiles.

JewishFilmFestivals.org
Over 1700 festivals and 3500 film listed

JewishBookWorld.org
Over 2000 new books listed in the last 10 years

It Is Great Everywhere / Mindenhol Jó